Pines of the Bodie Hills

Four pine species are found in the Bodie Hills, but only only one is abundant. The other three occur in small areas of locally favorable habitat, hangers-on from a time centuries ago when the climate was wetter and cooler than now. 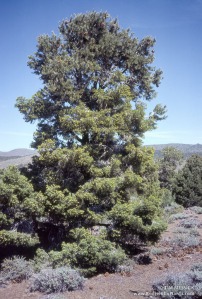 Single leaf pinyon (or piñon) (Pinus monophylla) is the abundant one. It’s common at low to mid elevations in the range, mostly below 8,200–8,400 feet, and occasionally up to 9,000 feet. Pinyon-juniper woodlands, typically with varying amounts of pinyon and Utah juniper (Juniperus osteosperma) growing together, are common in a belt all the way around the range. Single leaf pinyon is common throughout much of the Great Basin, and it’s the tree for which the Pine Grove Hills (just north of the Bodie Hills) and the Pine Nut Mountains (east of Carson City) are named. The seeds of these beautiful trees were a staple food of indigenous peoples wherever pinyons grow, and are still harvested by today’s native Americans. Pinyon jays and other wildlife depend on these seeds for their survival.

From low elevations to high, the three less common pines are: 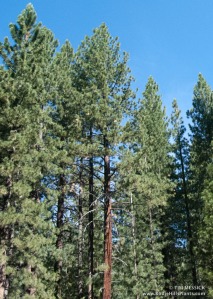 Jeffrey pine (Pinus jeffreyi) is abundant on the east side of the Sierra Nevada, especially between Mono Lake and Mammoth. In the Bodie Hills, it occurs in about two dozen very small stands in three areas: (1) the west-central Bodie Hills, mostly in and near Hot Springs Canyon, (2) the far north end of the Bodie Hills, with the largest stand in the Mineral County segment of lower Masonic Gulch, and (3) on the south side of east Brawley Peak. All of these stands are on or near soils derived from hydrothermally altered andesite (i.e., areas of ancient hot spring activity). These soils are lighter in color and more sparsely vegetated than adjacent soils, which are darker and often densely vegetated with sagebrush and pinyon pine.  The hydrothermally altered soils have lower pH, less calcium, and less phosphorus. This and the lack competing vegetation may enable Jeffrey pine to tolerate lower annual precipitation than where Jeffrey pines normally grow (Source: DeLucia et al. 1988. Water relations and the maintenance of Sierran conifers on hydrothermally altered rock. Ecology. 69(2): 303-311.) 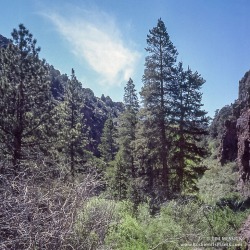 Lodgepole pine (Pinus contorta) is common throughout the Sierra Nevada and many other western mountain ranges. In the Bodie Hills it locally abundant at just one location: an unnamed canyon on the north side of East Brawley Peak than meets Bodie Creek (in Del Monte Canyon) about 1.7 driving miles northeast of the state line. (If you know a name for this canyon, please let me know!) The stand extends, almost continuously, from an elevation of 7,130 feet up to above 8,100 feet, almost to where the limber pines begin. A few other very small stands and even some isolated individuals can be found on north-facing slopes where snow melts late in the mid-portion of the range. 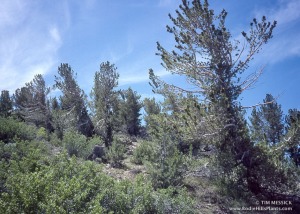 Limber pine (Pinus flexilis) is common in the high Sierra Nevada on rocky ridges and scree slopes at treeline. In the Bodie Hills, however, limber pine is restricted to small populations on north-facing slopes on some of the highest summits in the range. The largest stand is on East Brawley Peak, extending from the summit, at 9,420 feet, down the north side to about 8,600 ft. Parts of this stand burned in the Spring Peak Fire of August, 2013. Two other stands are on Mt. Hicks and another summit just south of Mt. Hicks. A few scattered individuals survive on Bodie Mountain, at the edges of what in “normal” years should be a long-lasting snow bank on the north side of the summit. There may be another very small stand on a ridge north of Potato Peak—or they might be lodgepoles—either way, this site needs to be checked in the field.