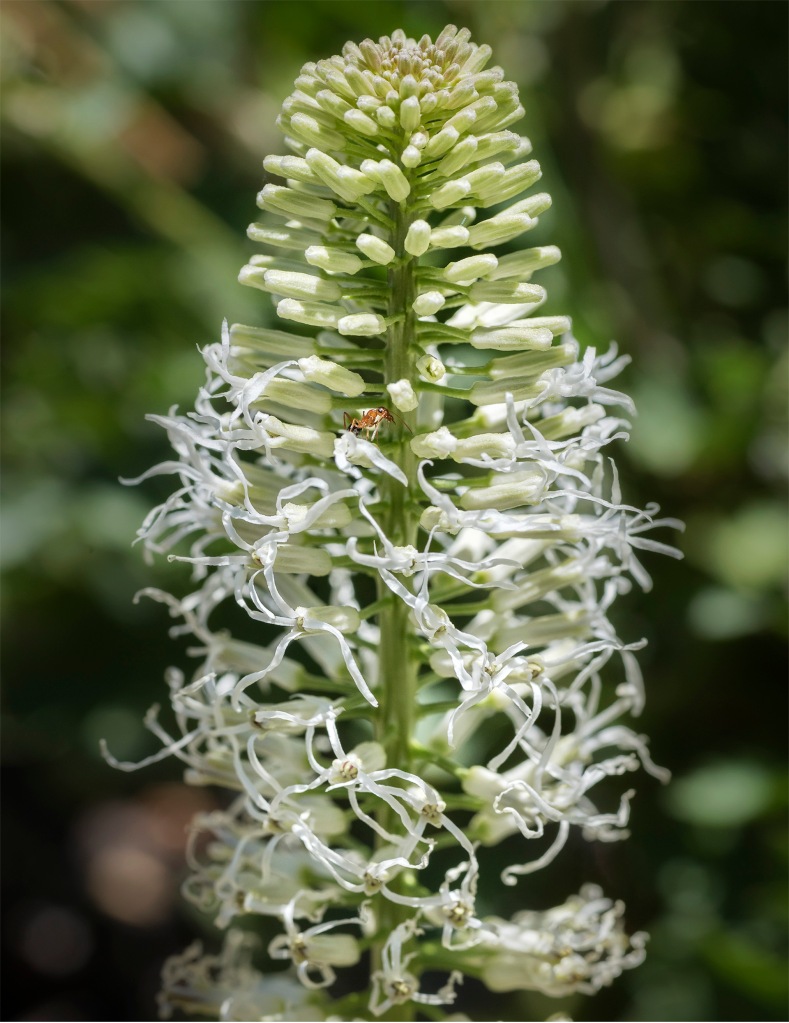 Thelypodium (thely-POD-ium) is a genus of about 29 relatively stunning species in the mustard family (Brassicaceae, a.k.a. Cruciferae). The genus ranges across much of the desert and intermountain west, Columbia Basin, southwestern United States and northern Mexico. Four species occur in the Bodie Hills, Mono Basin, and adjacent areas: T. crispum, T. laciniatum, T. milleflorum, and T. integrifolium subsp. complanatum. A fifth species, T. flexuosum occurs to the north and east (as close as Carson City), but has not been documented in the Mono-Mineral-Lyon county area.

Thelypodium flowers (in our area) are mostly whitish, with slender petals. In most of our species the flowers are packed into a dense, tall, slender raceme with many dozens of flowers (but fewer flowers in a short inflorescence in T. integrifolium). In fruit, the plants develop long, slender, spreading or ascending siliques (fruits), parts of which often persist long after they have opened and scattered their seeds. I’ve noticed that late in the year, or early the following spring, these tall, dried-out stems with the remains of old fruits may be much easier to spot from a distance than fresh plants of the current growing season — especially in early morning light or against a dark background.

For more than a century, taxonomists studying Thelypodium and related plants have found it difficult to decide what species to include in this genus as opposed to other allied genera. Most of the species are fairly easily defined; the generic boundaries are not (Al-Shehbaz 1973). Little surprise, then, that learning to recognize Thelypodium as a genus is best accomplished by learning to recognize some of its species. The genus becomes recognizable once you have a feel for the differences and similarities among its species. Several other genera share various characteristics with Thelypodium, and together these are recognized as a larger group, the tribe Thelypodieae (thelypod-EE-ee-ee). Other genera of Thelypodieae found in this area include Stanleya, Caulanthus, Streptanthus, and Streptanthella.

The name Thelypodium is based on the Greek: thēlys for ”female” and podion, a diminutive for “foot.” This refers to the distinct “gynophore” in most species of Thelypodium. A gynophore is a kind of stalk or stipe (or foot) that raises the ovary and fruit above the receptacle of the flower. Payson (1923) asks, “What is the significance of this stipe? Recent students of the Cruciferae are nearly unanimous in the belief that this family has been derived from the Capparidaceae [Caper family, also treated as part of Cleomaceae] or from capparidaceous-like ancestors. . . . In the Capparidaceae a stipe [or gynophore] is almost universally present and is often very long. Granting this relationship between the two families, the presence of a stipe in the Cruciferae, in which it is not of common occurrence, must be considered either a primitive character or an atavistic [ancient or ancestral] variation. For the sake of argument . . . the stipe in this group will be assumed to be a primitive characteristic.” So, Thelypodium retains what is considered a primitive structure (the gynophore) in a family that has evolved (eventually losing its gynophores) and diversified with great success worldwide.

Photos showing the pedicel, receptacle, gynophore, and fruit in Thelypodium (left) and Cleomella (right). The presence of a gynophore in Thelypodium suggests an evolutionary link between mustards (Brassicaceae) and capers (Cleomaceae).

Upon finding a suspected Thelypodium in the field, here are the characteristics to look for (and photograph, if you’re posting to iNaturalist, Calflora, or CalPhotos):

Thelypodium crispum (Wavy-leaved thelypody) may be the commonest of the four species in the Bodie Hills, but it has the narrowest geographic range overall. It is found from Inyo and Esmeralda counties north along the eastern Sierra Nevada and western Great Basin to Lassen and Washoe counties. It grows mostly in moist, alkaline or mineralized, sandy or gravelly soils near meadows or springs, but occasionally also in sagebrush scrub or pinyon-juniper woodland. I’ve seen it also on subalpine glacial moraines above Virginia Lakes.

It’s generally the shortest Thelypodium in this area — typically under 3 feet tall, often just 1–2 feet tall. Mid-cauline leaves are narrowly lance- or arrow-shaped, sessile, and clasping the stem. The leaf margins are entire (neither lobed nor toothed), and may be either flat or wavey (leaves with wavey margins are called “crisped”; hence T. crispum). The fruiting pedicels are ascending, often pressed against the stem, and the fruits are straight, stiff, and less than 2 inches long. T. crispum is similar to and sometimes misidentified as T. brachycarpum. The latter occurs mostly in far-northern California and southern Oregon; its fruiting pedicels are horizontally spreading.

The next two species may appear similar from a distance — larger plants of both may stand as tall as a person, rising above the surrounding shrubbery, with striking, many-flowered racemes of white (or creamy- or greenish-white) flowers. Both have slender fruits 1.5–4 inches long, that tend to bend, curl, or droop when fully grown. On closer inspection, these two are easily recognized by differences in leaf shape, pedicel shape, and habitat.

Thelypodium laciniatum (Cutleaf thelypody) is a cliff-dweller. It favors rocky crevices and outcrops, and its distribution suggests it may favor volcanic rather than granitic substrates. Fruiting pedicels are spreading to just slightly angled upward, not strongly curved. The lower leaves are laciniate, i.e. irregularly lobed, often deeply so. The inflorescence may contain dozens to well over a hundred flowers. Plants may be few-stemmed or be virgately branched, i.e., with numerous stems fanning out from the base.

Thelypodium laciniatum often has many stems (but this may be 2 or 3 plants). 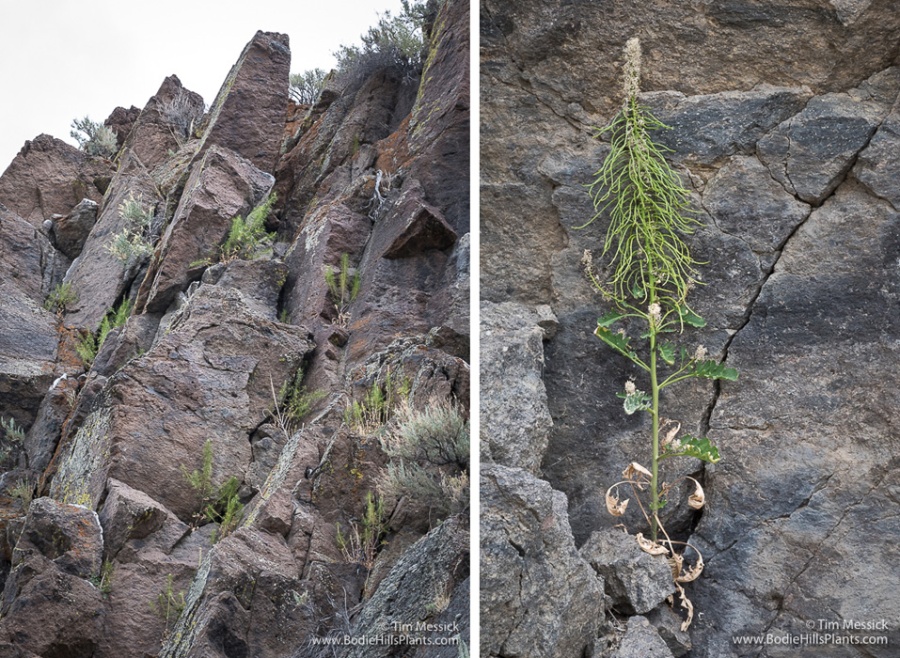 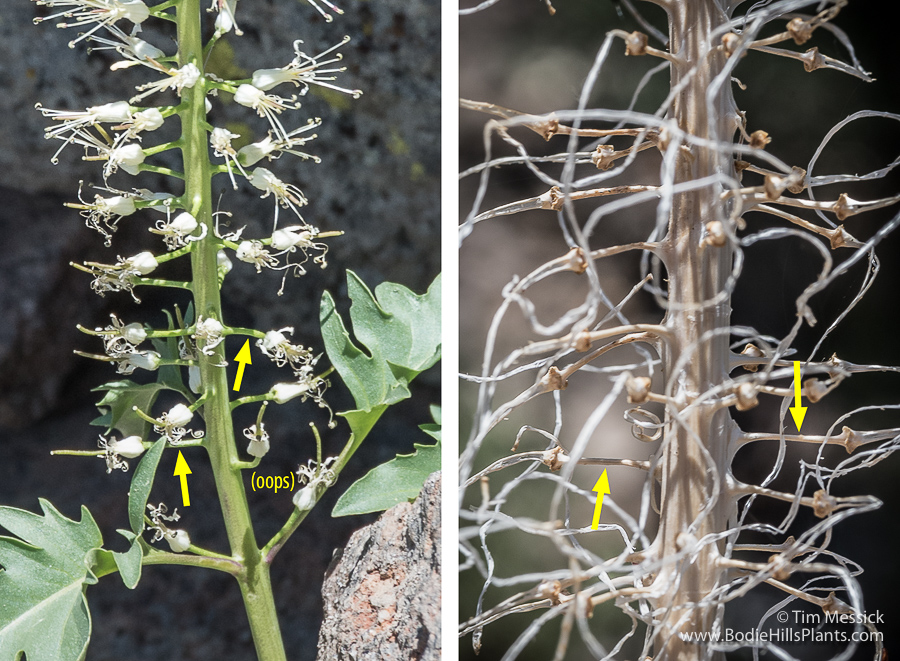 See how the pedicels of Thelypodium laciniatum are all straight? (yellow arrows). Except for one that read the wrong instructions.

Good places to look for T. laciniatum include the cliffs east of Hwy 182 and the East Walker River 1.1 road miles north of Bridgeport Reservoir Dam, cliffs above NF-028 at The Elbow, and the Owens River and Lower Rock Creek gorges. You may need binoculars for a good look at these plants.

Thelypodium milleflorum (Many-flowered thelypody) inhabits  sandy or deep silty soils. The pedicels are bent strongly upwards (this becomes more apparent as the flowers go to fruit, so early in the season look around for last year’s stems). Aven Nelson (1911), in his description of this species (from collections in Idaho), says the fruits are “normally strongly ascending or suberect, but often irregularly spreading as if from their weight.” The lower leaves are dentate—toothed or shallowly lobed, but not deeply lobed. The epithet “milleflorum” suggests it has “a thousand flowers.” Nelson offers no explanation and I haven’t counted, but clearly there could be several hundred flowers on a robust plant with several inflorescences (and the same could be said for T. laciniatum). This is a CNPS “List 2B.2” plant—”Rare or Endangered in California, common elsewhere. Fairly endangered in California.” 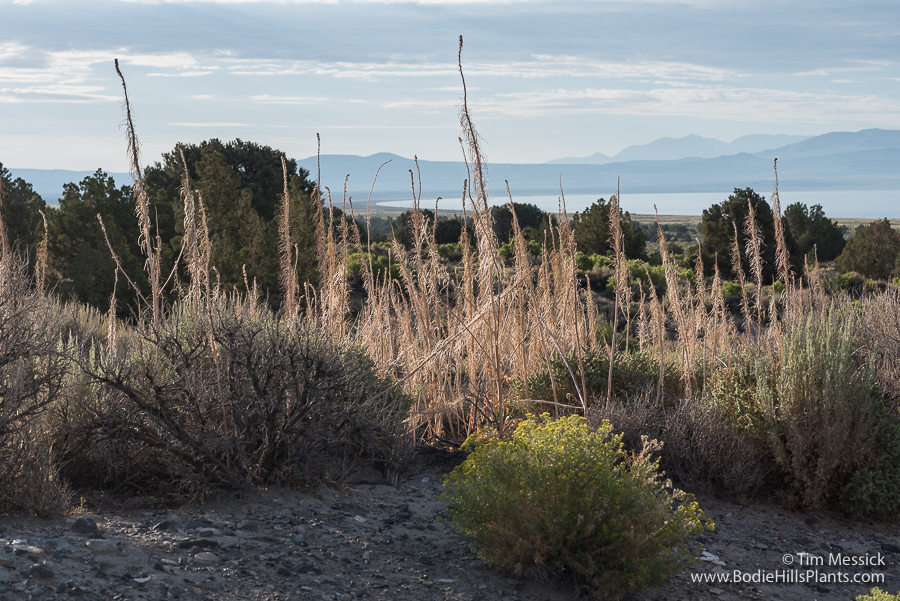 Sometimes Thelypodium milleflorum grows in dense stands like this; other populations are more dispersed.

Young stems of Thelypodium milleflorum. These will grow much taller and the racemes will develop many more flowers over the next 2 to 3 months.

Thelypodium milleflorum in soft, silty-sandy soil at the edge of a pinyon pine grove. It’s done flowering, but the fruits are still green.

See how the pedicels of Thelypodium milleflorum all curve up? (yellow arrows).

Good places to look for T. milleflorum include Goat Ranch Cutoff, Dobie Meadows Road, and probably other sandy places around the north and east margins of Mono Basin.

Thelypodium integrifolium is the most widespread of the species here — with five subspecies, its range extends throughout much of the desert and intermountain west. In the Bodie Hills, however, we have only one subspecies: T. integrifolium subsp. complanatum (Foxtail thelypody), which is the one seen from the eastern Sierra across most of central and northern Nevada. Its inflorescences are short and strongly congested at the ends of long, nearly naked branches. The flowers are usually a pale lavender-purple, sometimes white. It grows in moist to wet, alkaline or silty soils of meadows, creeks, and sometimes adjacent uplands.

Here are a few other plants that could trick you into thinking they might be a Thelypodium: 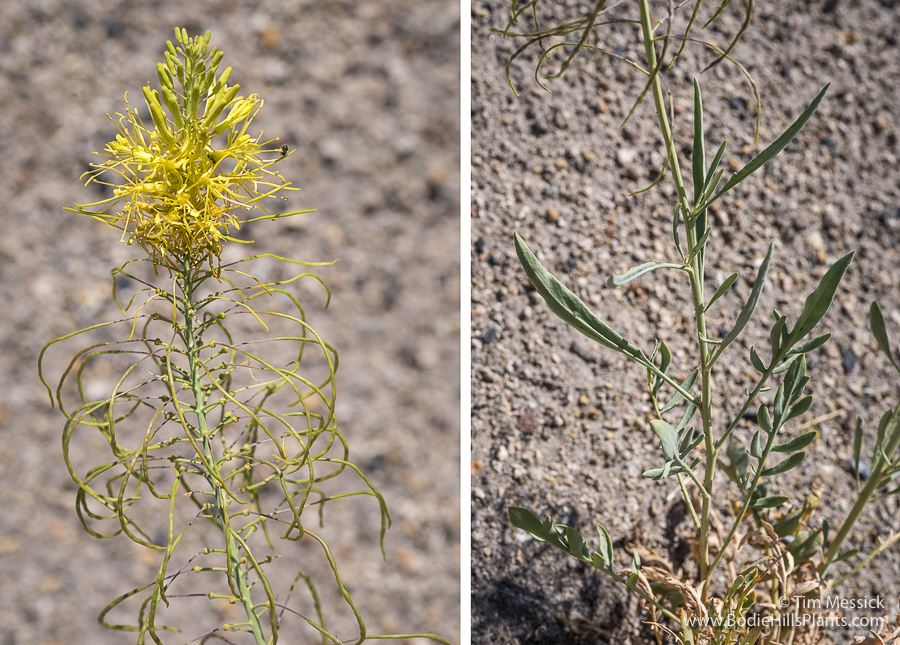 Stanleya pinnata is a very primitive mustard (with long gynophores). It has bright yellow flowers and pinnately lobed lower leaves.

Cleomella hillmanii (left) and Peritoma serrulata (right) are in the Cleomaceae, from which the primitive mustards may have evolved. These too have gynophores. Their compound leaves (with three leaflets) are very different from Thelypodium leaves.

References
Al-Shehbaz, Ihsan A. 1973. “The Biosystematics of the Genus Thelypodium (Cruciferae).” Contributions from the Gray Herbarium of Harvard University, no. 204 (1973): 3-148. This authoritative (145-page) reference on Thelypodium can be viewed page-by-page on JSTOR at http://www.jstor.org/stable/41764710 or downloaded as part of a larger PDF containing Nos. 203, 204, and 205 from the Biodiversity Heritage Library at https://www.biodiversitylibrary.org/item/122971#page/154/mode/1up.