How Straight was the Green Creek Power Line?

One of the popular myths about Bodie—because it makes a great story—is that the Green Creek power line, built in 1892 to run equipment in the Standard Mill, was an absolutely straight line. The reason, supposedly, was that its builders were concerned the electricity might jump off the wires and get lost if the line was not straight. Fun story, but it doesn’t hold up to close scrutiny. Yet the facts, if scrutinized, are still interesting.

A map of the power line appears in an article titled “Electric Power Transmission Plants and the Use of Electricity in Mining Operations,” by “Thomas Haight Leggett, of Bodie, Mono County, California.” This article was published on pages 413—455 of the Twelfth Report of the State Mineralogist (Second Biennial,) Two Years Ending September 15, 1894, by the California State Mining Bureau, J. J. Crawford, State Mineralogist. [Google Books link]

The map is not very detailed—it shows the power line, selected pole numbers, section lines, roads, creeks, a few summits, and a telephone line to Bodie.

The power line itself appears to have been mapped with some precision with respect to section boundaries. If you overlay the 1894 map on the 1909 US Geological Survey topographic map and register the two along the section boundaries (see below), the alignment and selected topographic features appear consistent with the 1909 topography. But the roads and creeks on the 1894 map are at best rough approximations of where topographic maps show them. The makers of the 1894 map were surveying the power line, not the roads or creeks, and had no aerial photographs for context. 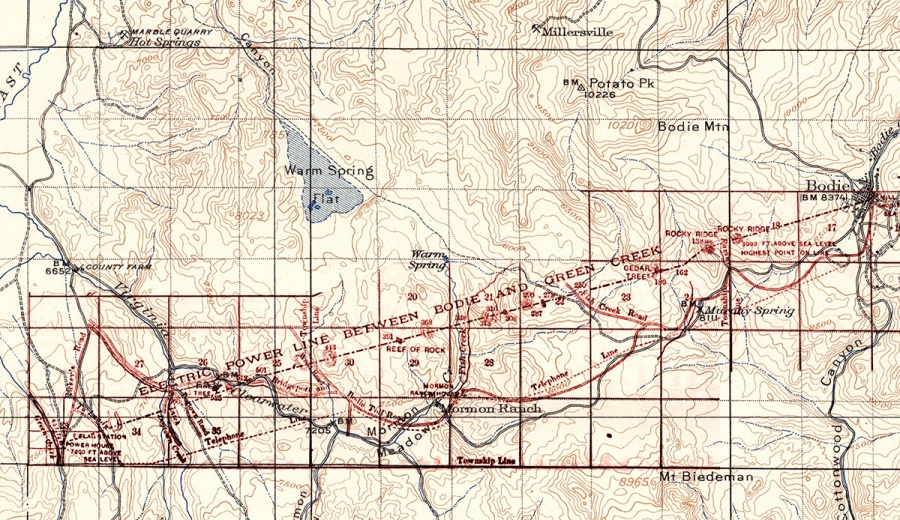 Was it straight? That depends on how you look at it. In plan view (map view), it was very nearly straight. This makes good sense, regardless of any concerns about losing power at bends or corners, because the straightest line is the shortest line, which is also probably the least expensive line to build and the quickest line to finish. According to the 1894 map, there were two or three slight bends where the line ran through the shallow canyon of lower Clearwater Creek. There were two more slight bends as it crossed a ridge and steep slopes north of Murphy Spring. Although not shown on the map, or maybe not visible at the scale of this map, I expect there was another bend or two as the line approached Bodie. If not, the line would have run directly through the IOOF Hall and Dechambeau Hotel—not likely, I think.

In profile view, the power line was much less straight. It crossed about a dozen substantial gullies or creeks, with about as many sizable hills and ridges in between. Some had steep slopes exceeding 40 percent. If you trace the approximate alignment from the 1894 map onto Google Earth, you can view its profile (below). The horizontal scale is greatly compressed, which accentuates the slopes and angles, but it’s hardly a straight line. 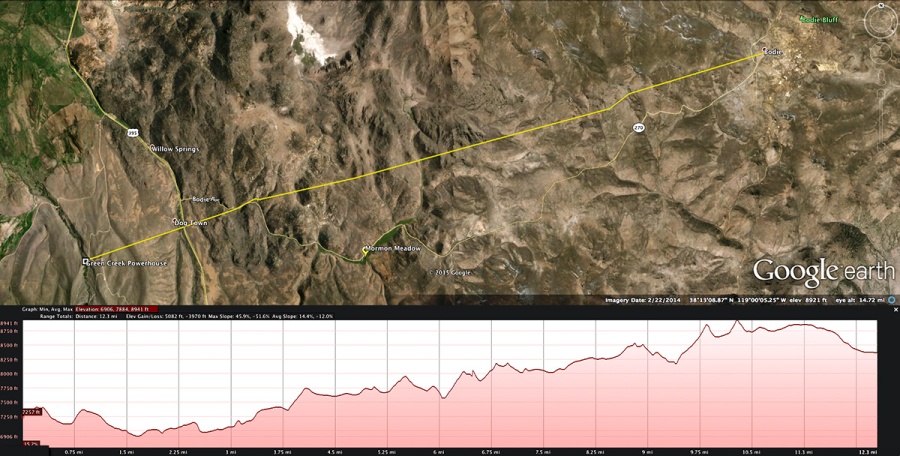 So were the builders of the Green Creek Power Line really concerned about losing  their electricity at bends in the wire? Electricity began lighting cities in the 1880s, but the distance of those electric transmissions was short. In the early 1890s, longer-distance transmission of power was new, and at first experimental. Leggett quotes a Mr. Chas. F. Scott from a letter, “The transmission of 100 horse-power a distance of 109 miles, from Frankfort to Lauffen, Germany, in 1891, showed conclusively that from an engineering standpoint, at least, the transmission of power over long distances by electricity was perfectly practicable…. Since then, however, plants have been installed both in Europe and in the United States, and are to-day successfully transmitting electricity for lighting and power purposes over distances ranging from 1 to 30 miles.”

When electricity came to Bodie in November 1892, long-distance transmission had been proven, but experience was limited. The project at Bodie had its skeptics and Leggett, who built the Green Creek Power Line, was of course a strong proponent. There was great excitement and relief when the first electricity arrived and set the motors spinning, but I doubt the engineers were too concerned that it wouldn’t work.

“The line crosses extremely rough country, not 500 yds. of which is level beyond the town limits. Most of the ground is very rocky, over 500 lbs. of dynamite being used in blasting the pole-holes.”

“Tamarack” has been used over the years to refer to a few different kinds of trees. Among plant people, “tamarack,” or “tamarack larch,” now usually refers to Larix laricina, a deciduous conifer native from the northeastern United States across much of Canada to Alaska. The nearest native stand is over 800 miles from Bodie. In the past, the tree we now commonly call lodgepole pine (Pinus contorta) was sometimes called “tamarack pine,” or just “tamarack.” Lodgepole pine has a growth form well suited to electrical poles, and is abundant on the east side of the Sierra Nevada, not far from Bodie.

Bighorns at The Elbow

Last weekend (in late March), I drove east along the north edge of the Bodie Hills, following the well-graded forest road NF-028. The East Walker River flows east here between the Bodie Hills to the south and the Pine Grove Hills to the north. In a canyon at the edge of Fletcher Valley, the river makes a couple of sharp bends at a place called “The Elbow.” From here the river flows north toward Yerington. 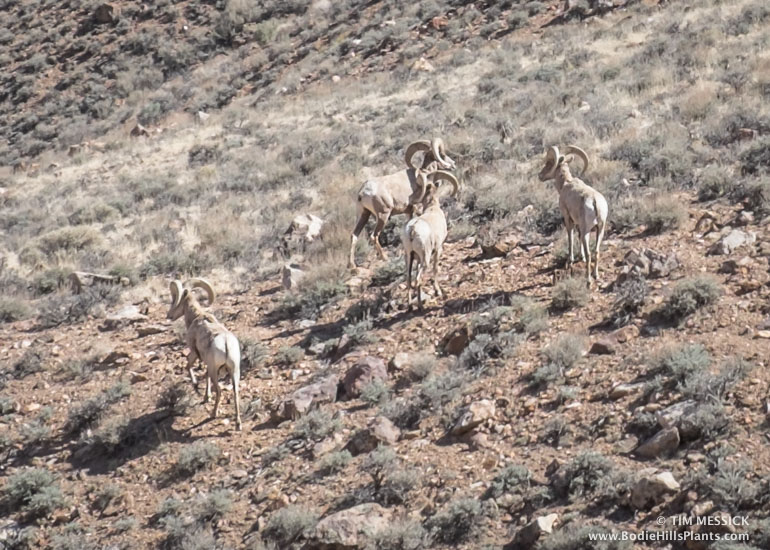 I hardly expected to see four adult male desert bighorn sheep (Ovis canadensis nelsoni), but suddenly here they were, on a hillside below the grade called “Dead Ox Pitch”, jogging south toward a steep, rocky hillside. Had they been grazing in meadows near the river? Was this unusual? Has the very dry winter and 4-year drought forced them to visit areas they would usually avoid? Did they continue on into the Bodie Hills or return to the Pine Grove Hills? Apparently these animals are known to occur in the Pine Grove Hills. (If you’re a sheep biologist, please leave a comment!) 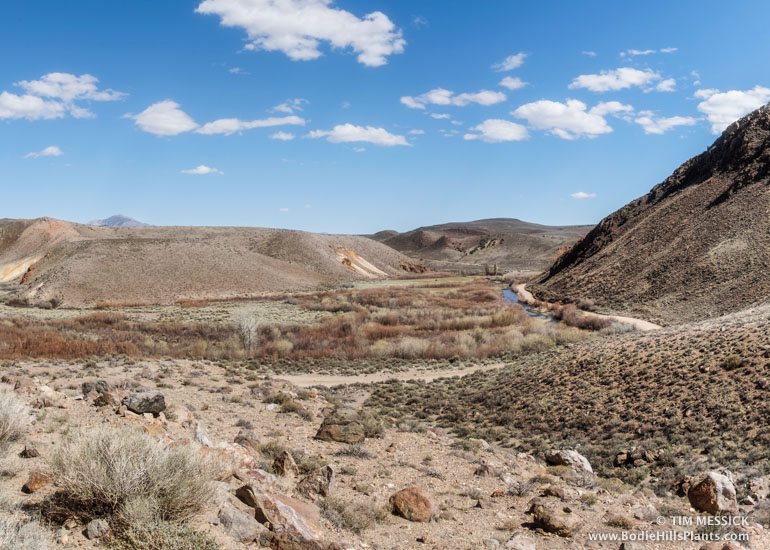 The Elbow from Dead Ox Pitch

East Walker River at The Elbow

Another interesting view along NF-028: from where the road crests a hill just east of the paved highway (Nevada 338), you can look south across the valley of the East Walker into the bottom of Masonic Gulch. With binoculars, you can make out a stand of Jeffrey pine trees (Pinus jeffreyi), part of the largest stand in the Bodie Hills. It continues south in Masonic Gulch to about the California state line.

Jeffrey pines (at the bright circle) in Masonic Gulch