Does Dune Horsebrush Occur in the Bodie Hills? 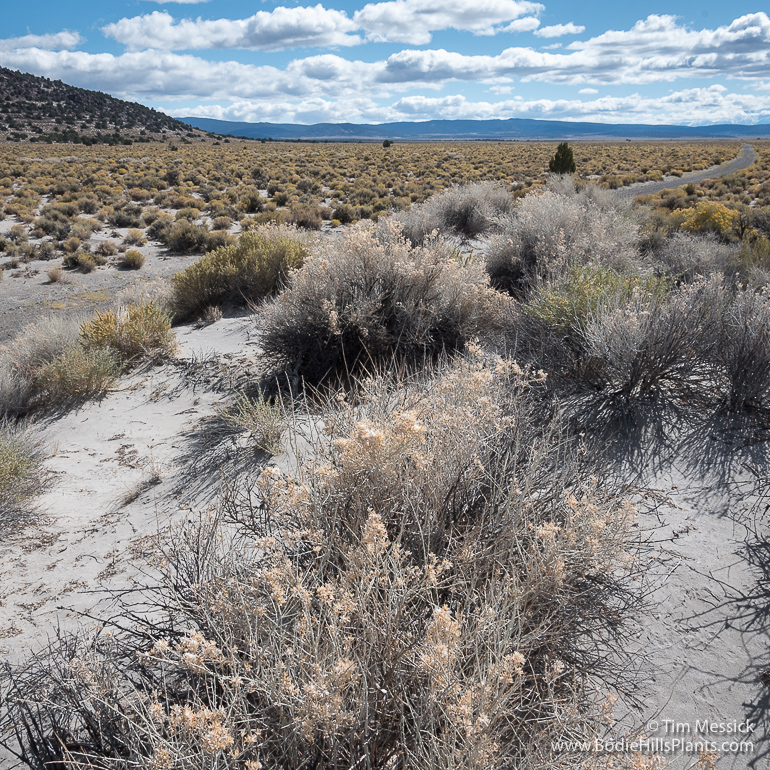 Tetradymia tetrameres isn’t normally a hill-dwelling plant. As the common name suggests, it’s found most often in deep sands and old, stabilized sand dunes (foreground and center, in the photo above). Deep sand and old dunes usually occur in valleys and basins, not hills, though sometimes deep sandy soils can be found in canyons or ravines that penetrate hilly uplands. 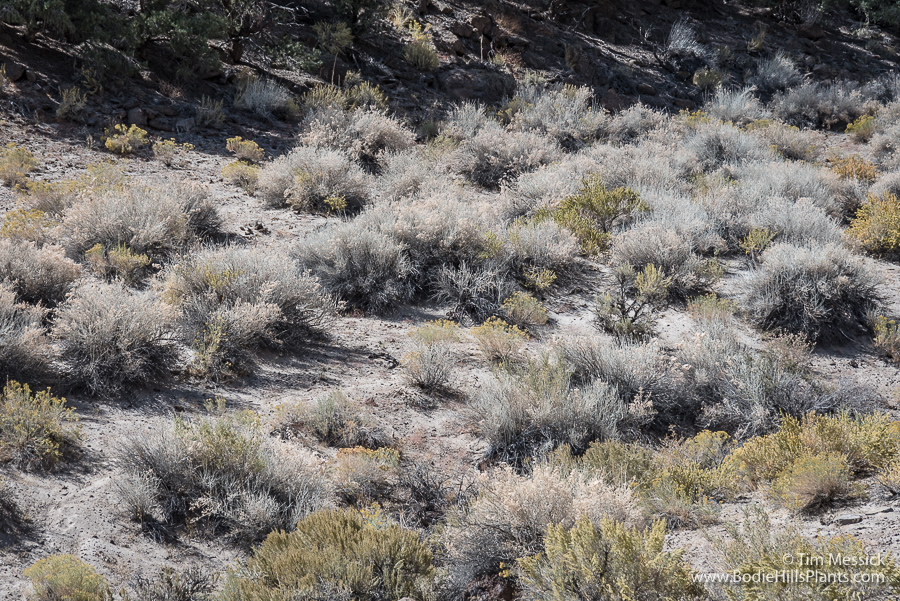 Dune horsebrush near the mouth of a canyon entering Adobe Valley.

In California this plant found in the north and northeastern Mono Basin, in Adobe Valley (southeast of Mono Basin), and perhaps in Deep Springs Valley (south of the White Mountains). The CNPS Inventory of Rare and Endangered Plants ranks it as “fairly endangered in California, common elsewhere” but globally it’s “apparently secure, considering populations outside California”.

Outside of California, the “global” range of dune horsebrush encompasses just a handfull of counties in northwest and central Nevada — again, mostly in “sand dunes,” “sandy desert,” “dunes of compacted sand,” “sand in and around small, rather stable dunes,” etc. 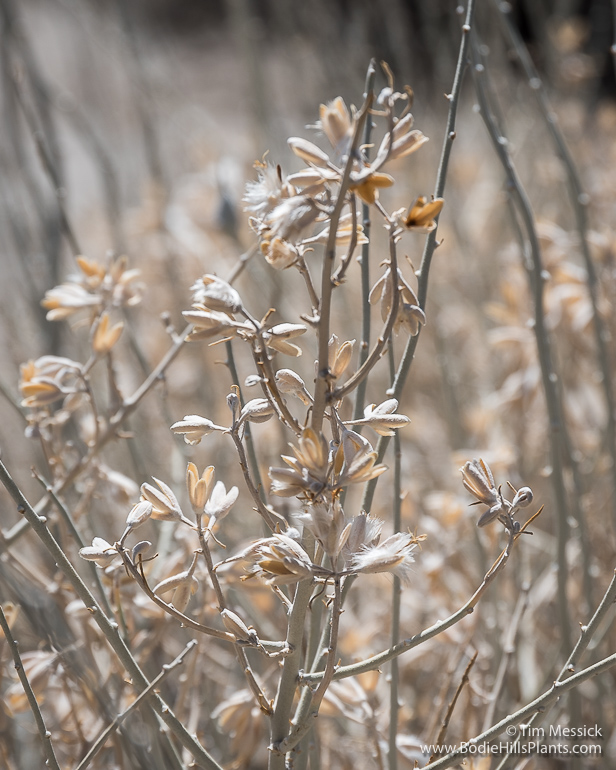 Persistent phyllaries and lingering papus bristles give dune horsebrush
a bright appearance during September and October.

But does it occur in the Bodie Hills? Well, there’s an unnumbered collection by the Mariposa-based lawyer/botanist Joseph Whipple Congdon dated Aug 17, 1898. The location is given as “Bodie. Desert road.” Berkeley Mapper places the collection site near Bodie, which is logical based on the label information, but unlikely because there are no deep sands or dunes near Bodie. Having not seen this ancient specimen (DS1815), I thought it might be misidentified, but the specimen bears no annotation labels changing the determination, and Congdon had previously collected Tetradymia canescens, again without subsequent corrections.

His other collection locations on August 17  (“Mono Lake,” and “Desert Road”) shed no further light on the location of the Tetradymia. But on the 13th he was at Mono Pass and Bloody Canyon. On the 14th he was at Walker Lake. On the 15th and 16th he was at “Walker Lake to Mono Lake,” “Below Walker Lake,” and “Near Mono Lake.” So this was the smaller Walker Lake east of Mono Pass, not the larger Walker Lake near Hawthorne in Nevada. I think he may have spent a night or two at Goat Ranch on the south edge of the Bodie Hills, because he collected there on the 18th, then on the 19th he was on his way to Bridgeport. I doubt he even went to Bodie on this trip.

So where did Congdon collect his Tetradymia tetrameres, and was it “in the Bodie Hills”? I think he encountered it in the stabilized dunes he would have passed through if he had traveled the road from the DeChambeau Creek area, past DeChambeau Ranch (on today’s Cemetery Road) to Goat Ranch. Today, these dunes are also crossed by Highway 167, and the practiced eye will easily recognize dune horsebrush there on both sides of the highway north of Black Point. But this is clearly in the Mono Basin, not in the Bodie Hills, and some 9 to 11 air miles from the town of Bodie. 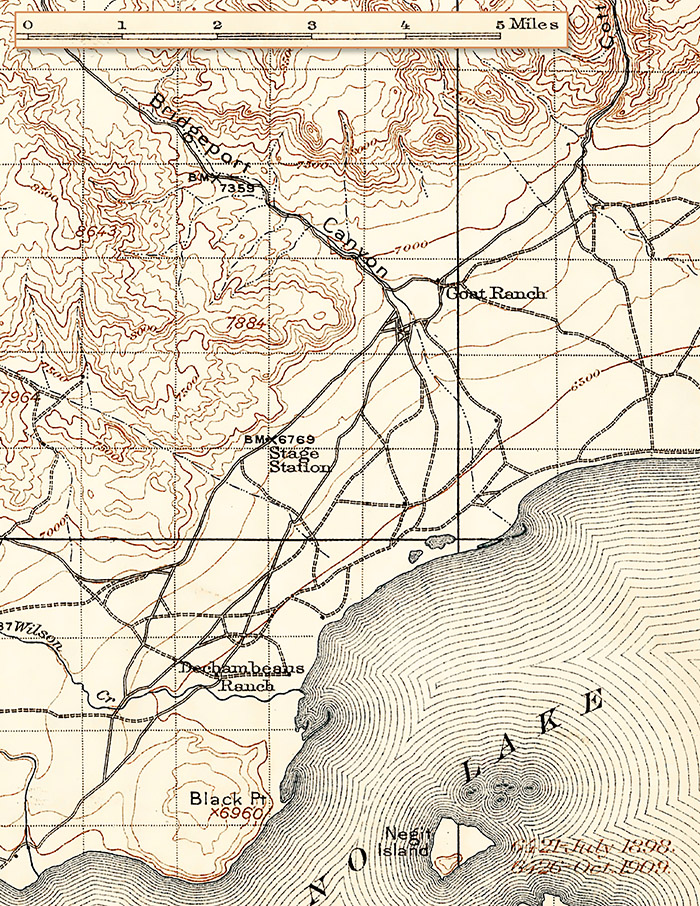 Part of the 1911 USGS 1:125,000 Bridgeport quadrangle, showing
the many roads between Black Point and Goat Ranch. 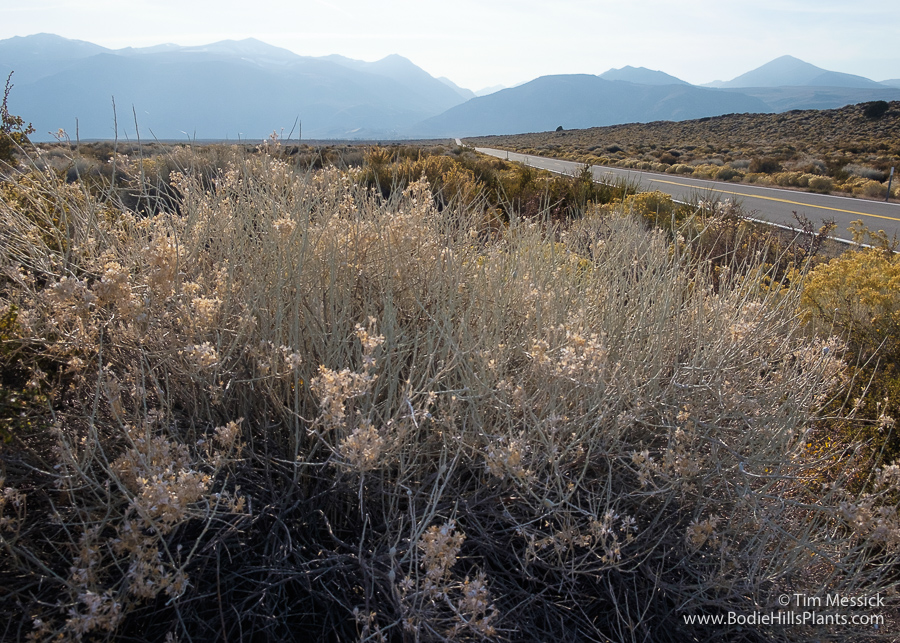 There are, however, at least a few individuals of T. tetrameres actually in the Bodie Hills, just barely, along Cottonwood Canyon Road, near the mouth of Cottonwood Canyon, in sandy soil, but uncharacteristically in pinyon pine woodland. Having also seen dune horsebrush on sandy flats and slopes in a canyon of the southern Adobe Hills, at the northwest end of Adobe Valley, I would not be surprised to see more of it along the southeast edge of the Bodie Hills, where sandy deposits of the northeastern Mono Basin climb into some of the little valleys and canyons west and northeast of Cedar Hill. 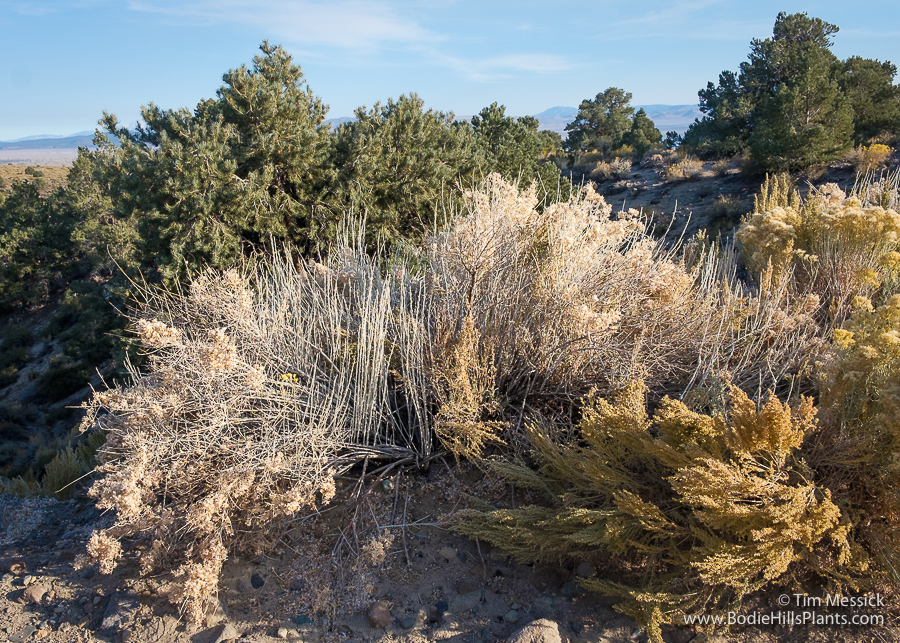 Dune horsebrush in marginal habitat at the edge of the Bodie Hills.

Dune horsebrush has a very limited range in California. It has a wider range in Nevada, but is still endemic to the western and central Great Basin. It is easily overlooked and partial to remote, dry, dusty places, so I think a lot more of it could be found with some deliberate searching.

Speaking of “horsebrushes,” what other Tetradymia species occur in the Bodie Hills? Tetradymia canescens, “gray horsebrush,” is common (but rarely if ever abundant) on dry slopes among sagebrush through much of the range. Tetradymia glabrata, “little leaf horsebrush,” was collected somewhere on Rough Creek by Clare Hardham in 1969, and near lower Cottonwood Canyon by Frank Vasek in 1975. I’ve seen it on a low ridge at the west end of Fletcher Valley. Tetradymia spinosa, the (visiously) “spiny horsebrush,” is found in the northern and eastern foothills of the Bodie Hills. Tetradymia axillaris, the longer-spined “cotton-thorn” or “longspine horsebrush” has been collected in northern Owens Valley (Mono Co.), north of Yerington (Lyon Co.), and north of Luning (Mineral Co.), but probably isn’t in the Bodie Hills. 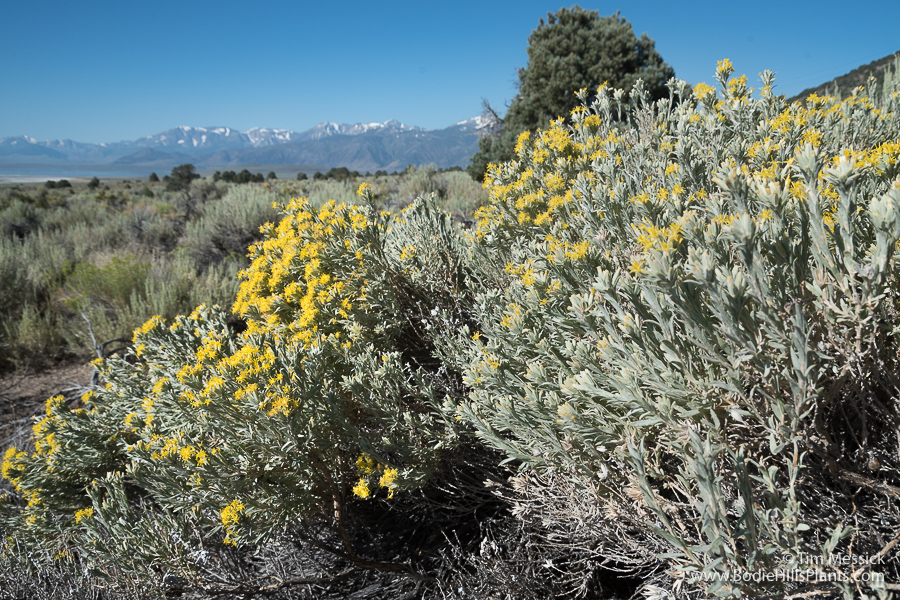 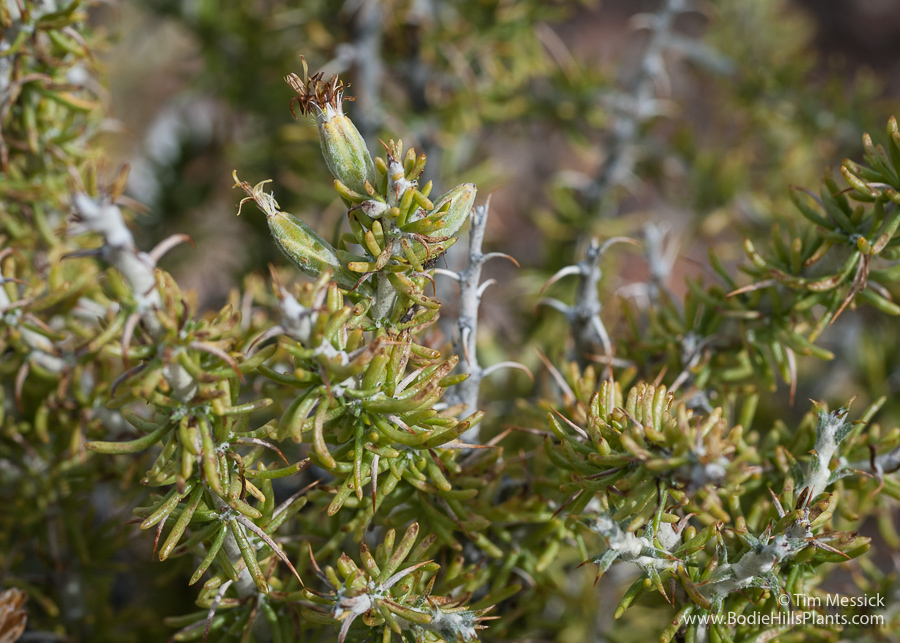