Looking west from Berlin (Ione Valley and the Paradise Range)

Over the last couple of springs and summers I’ve made an effort to become more familiar with the flora of the central and western Great Basin, east of Mono County and the Bodie Hills. Berlin-Ichthyosaur State Park, in northwestern Nye County, has become a favorite destination. Searching the internet for information about the flora of this area turned up very little, so that was reason enough to focus on compiling an initial catalog of plant life in this very pleasant and remote unit of the Nevada State Parks. 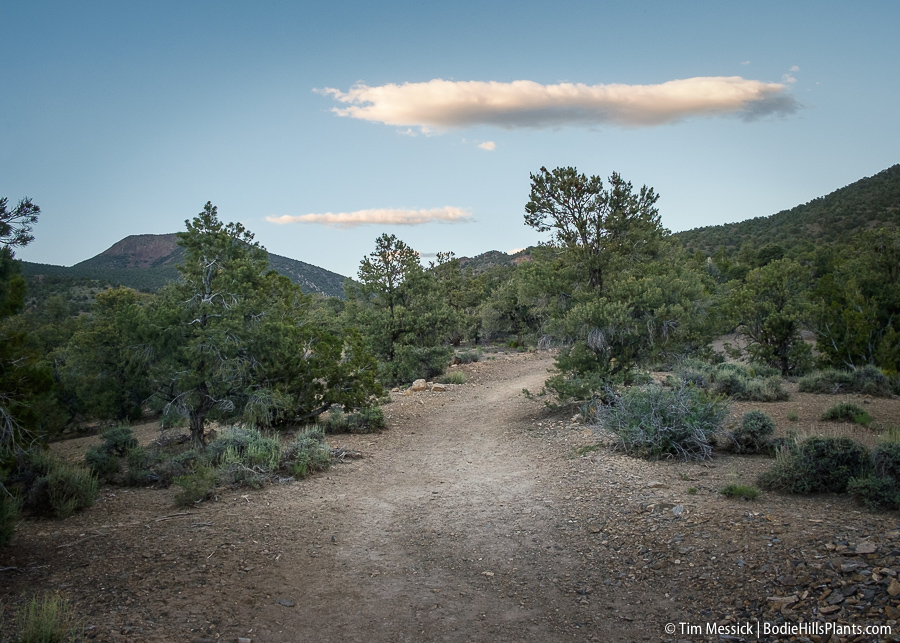 Trail near the campground

Berlin-Ichthyosaur sits at about the 7,000-foot elevation on the west slope of the Shoshone Range, overlooking Ione Valley. The park features the remains of Berlin (a mining town active from about 1863 to 1911), a large fossil shelter housing in-situ fossilized remains of several Ichthyosaurs (the Nevada state fossil), a campground, several trails, quiet solitude, and much plant and animal life to explore.

Were it not for the pandemic, I would be there again this month, looking for additions and corrections to my list. Later this year, I hope. For now, though, there’s enough in the list to make it worth sharing as a first-draft work-in-progress. I hope readers will find it interesting, take it as a challenge to find more species, and contact me with corrections, additions, or comments. You can find this first edition (a 2-page PDF) and any subsequent revisions on my Downloads page.

Photographs of many of the plants in this list (and a few other life forms) can be found here, on iNaturalist. 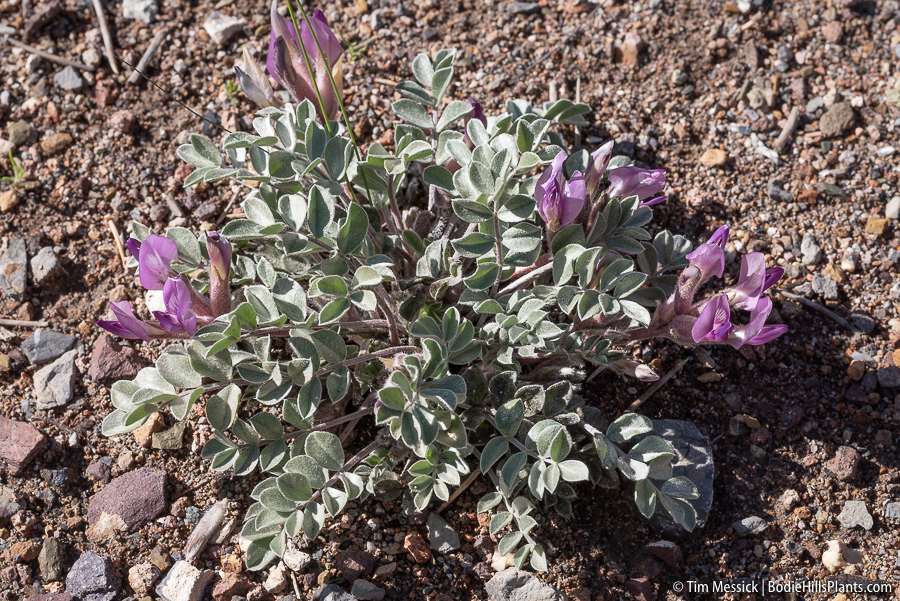 Along the Richmond Canyon Trail 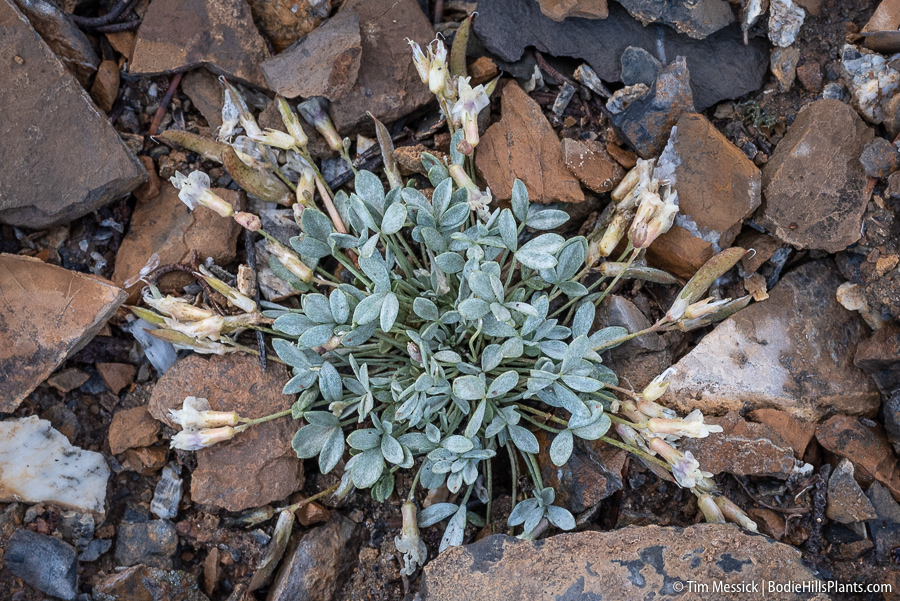 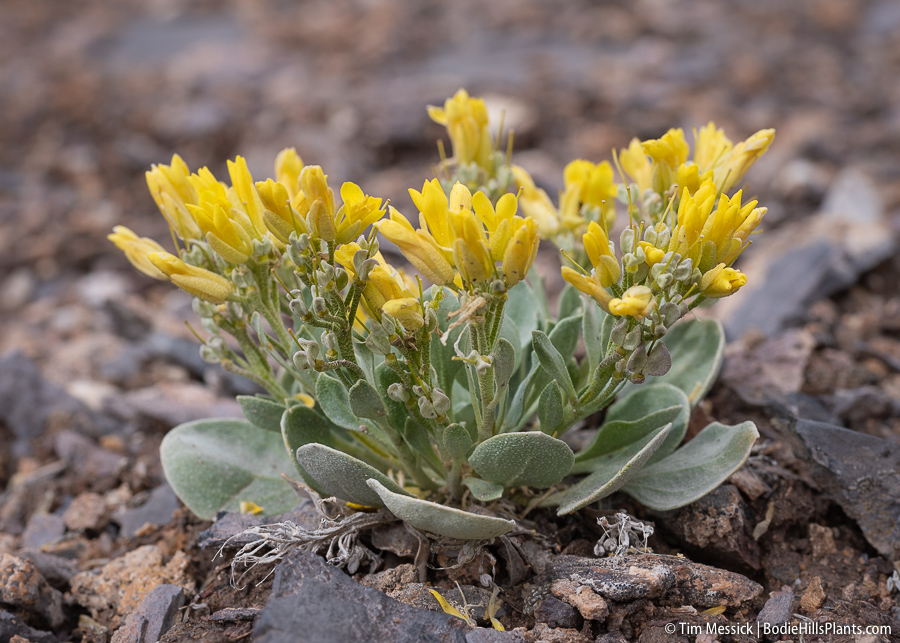 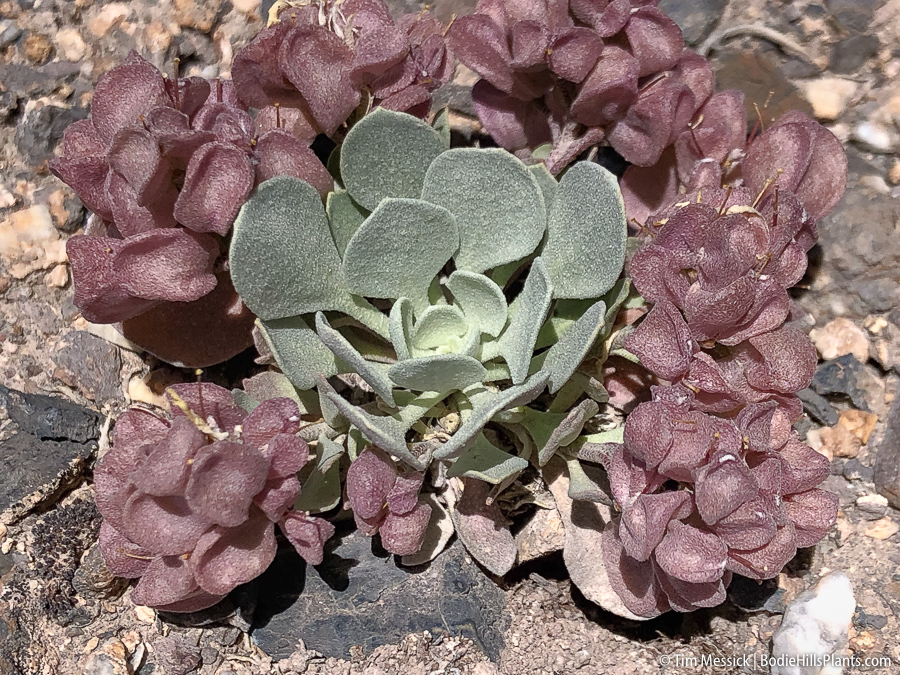 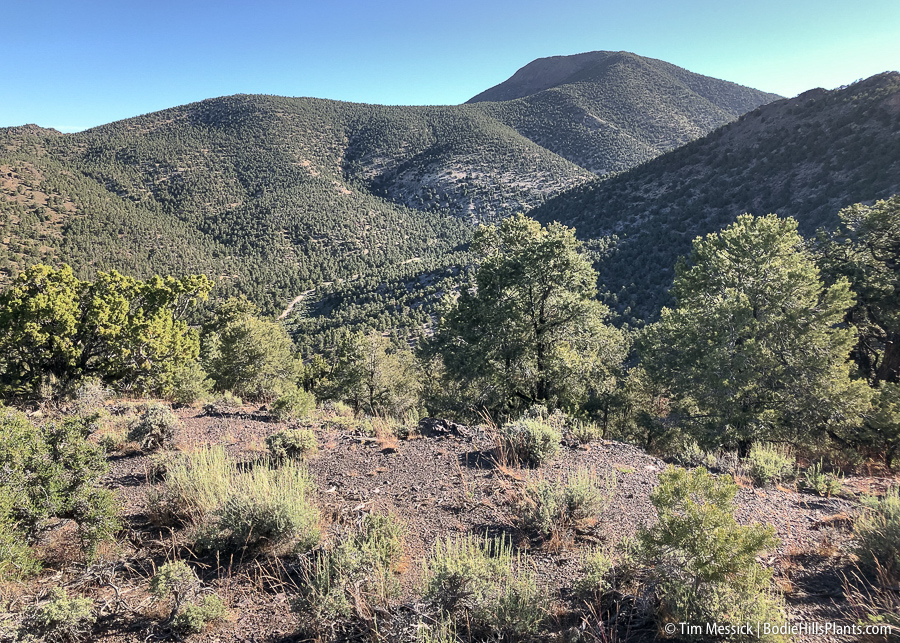 Plants of the Bodie Hills, 2020 Edition! 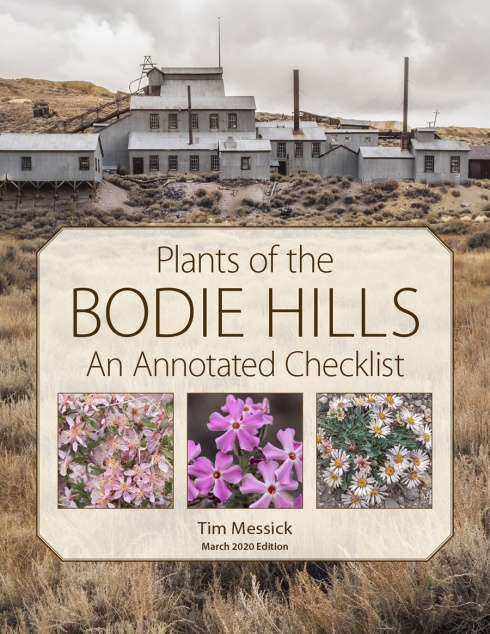 A new edition of Plants of the Bodie Hills, an Annotated Checklist is now available as a free PDF from the Downloads page. The 2020 edition includes a number of improvements:
• keys to species (and subspecies or variety) are provided for ALL genera that have more than one taxon in the Bodie Hills (keys to families and genera will come in future editions, maybe),
• several species have been added, based on recent field observations and herbarium data,
• lots of typos have been corrected.

One inconvenient result of all the added keys is that the document has grown from 64 pages last year to 92 pages this year. But you now have 3 options for how to use it: 1) load the PDF onto a mobile device, 2) print the PDF yourself, or 3) order a printed copy from MagCloud.

Using a mobile device. I’ve found the PDF to be quite readable on my iPhone 8+ (in the Books app), although it helps that I’m near-sighted. It’s even easier to read on an iPad, other tablet, or laptop. A phone or tablet is pretty easy to carry in the field, but you may want to secure it with a lanyard or wrist strap. (Personally, I like the ones from PodFob.)

Printing the PDF. You can print the PDF yourself or at a local print shop, but I highly recommend printing it 2-sided to conserve paper and reduce bulk and weight in the field. A comb or spiral binding, binder clip, or other binding will hold it together.

Ordering a print from MagCloud. I’ve made the PDF available for on-demand printing at MagCloud. I’ve ordered one of these myself, and found the print quality to be very good and the 2-staple binding to be adequate (though rough handling and folding could loosen some pages in the middle). Go to the document in the MagCloud Shop, click on the “Buy Print” button, fill out the “Join Us” section if you aren’t already a Magcloud customer, and complete the order. The price is $18.40 (as of March 2020); tax and shipping brings the cost to a little over $25. This is the base price of printing from MagCloud, with no additional mark-up for profit.

As always, your additions, corrections, comments, or questions are welcome. 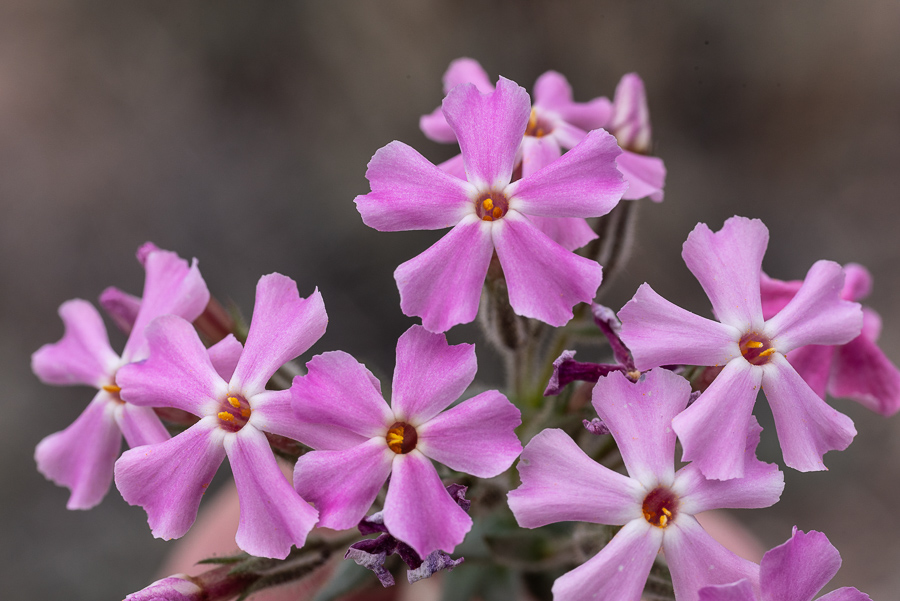 Gooseberries and Currants in the Bodie Hills

Two kinds of the gooseberries and and two kinds of currants — all in the genus Ribes (pronounced RYE-beez) — are found in the Bodie Hills. All are shrubs. The gooseberries have nodal spines on their stems; the currants lack spines. Flowers, fruit color, and leaf shape vary among the species, so all are fairly easy to identify throughout the year. Here’s a key, followed by photos of each: 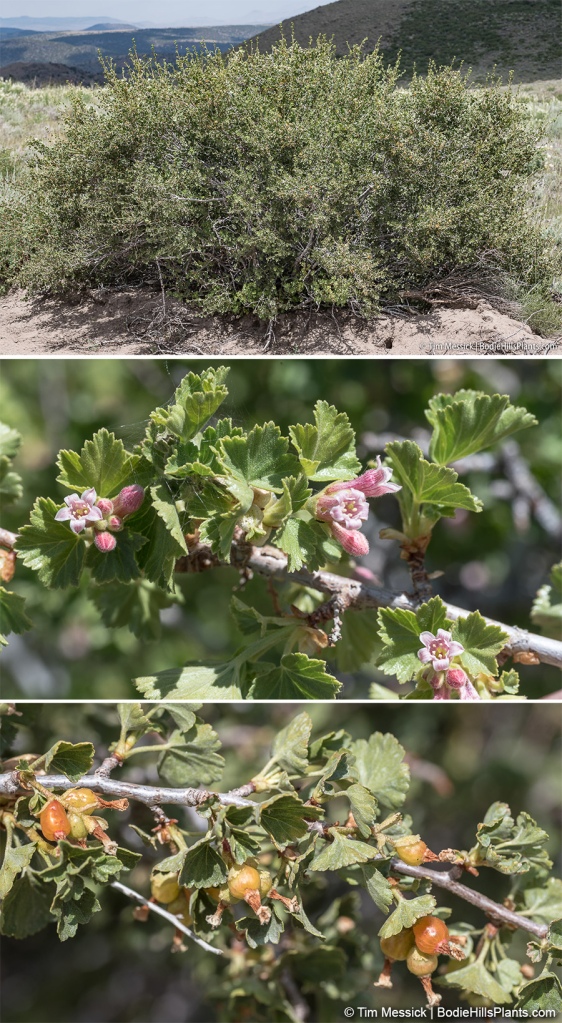 Ribes is generally recognized today as the sole genus in the Gooseberry family, Grossulariaceae. Since most families are named for a genus, why then not call the family Ribesaceae? In the beginning, the currants and gooseberries were placed in the Saxifrage family (Saxifragaceae). Several genera were recognized, but different authors lumped or split or organized them differently, and relationships were unclear. Ribes and Grossularia were the largest genera. Several attempts to improve their classification appeared over the years. Eventually, all the currants and gooseberries were removed to their own family, Grossulariaceae, named for Grossularia, but in time that genus was declared nomen illegitimum (an illegitimate name) and demoted in rank to Subgenus and/or Section. Grossulariaceae remains in use for the family, however, as nomen conservandum (a conserved name).

Several other Ribes can be found just west of the Bodie Hills in the high elevations and east side of the central Sierra Nevada. These include (among a few others):

CURRANTS (without spines):
Ribes nevadense. Mountain pink currant. A shrub of forest margins, often with spreading stems and an open branching pattern. The inflorescence is a dense raceme of bright pink flowers. The berries are blue-black, but usually glaucous — with a prominent white bloom (coating of yeast).

Ribes viscosissimum. Sticky currant. Another shrub of montane conifer forests, but rarely seen east of the Sierran crest. The leaves are relatively large (3–8 cm), shallowly lobed, and fragrantly sticky-glandular. The flowers are generally pink and white. The berries are black and glaucous. 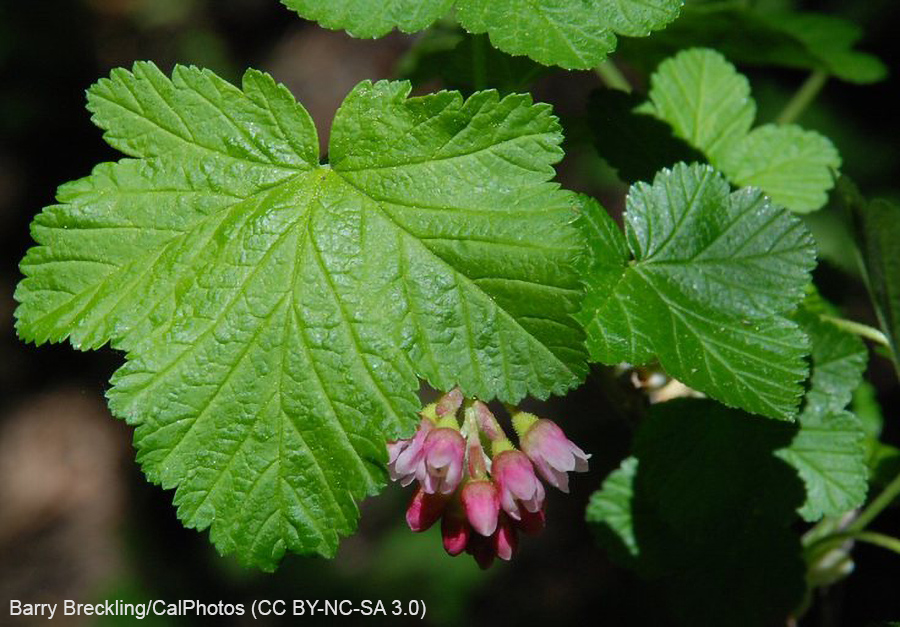 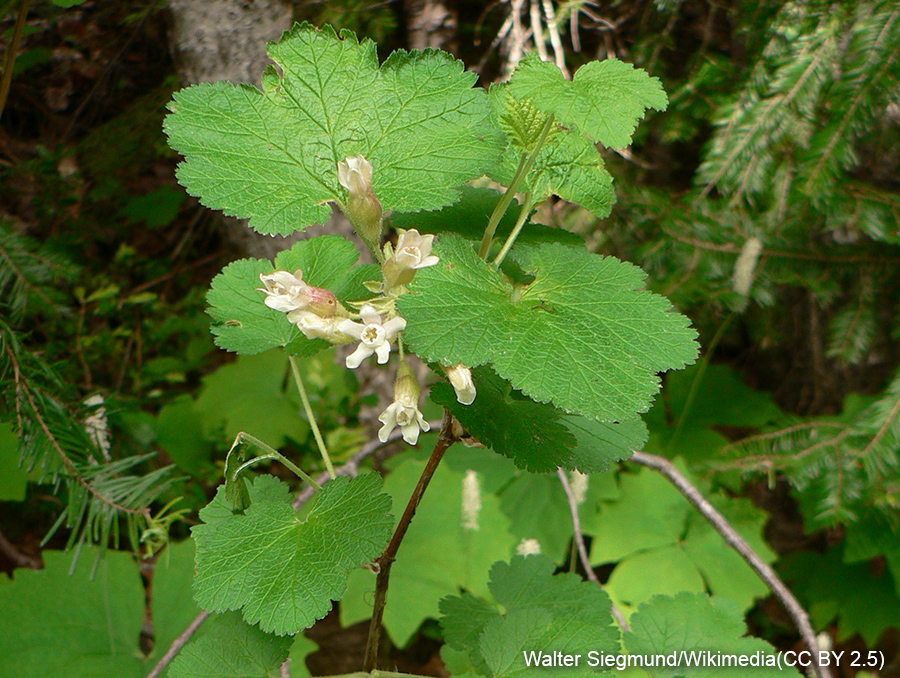 GOOSEBERRIES (with spines):
Ribes montigenum. Mountain gooseberry. A low sub-shrub with spreading to decumbent branches. It’s found in subalpine and alpine habitats, and is especially common near the bases of lodgepole pines. The small flowers have green, green-white, or pale yellow sepals, and very short, red petals. The berries are bright orange-red, with sparse, short, glandular bristles.

Ribes roezlii. Sierra gooseberry. Another low shrub with spreading branches. It’s widespread and common in forest, chaparral, woodland habitats up to about 9350 feet, but uncommon east of the Sierran crest. The sepals are reflexed, 7–9 mm long, and purple; the petals are 3–4 mm long, white and sometimes pink-tinged. The berries are much larger than other Ribes in this area: 14–16 mm in diameter, red, with long, stout prickles. 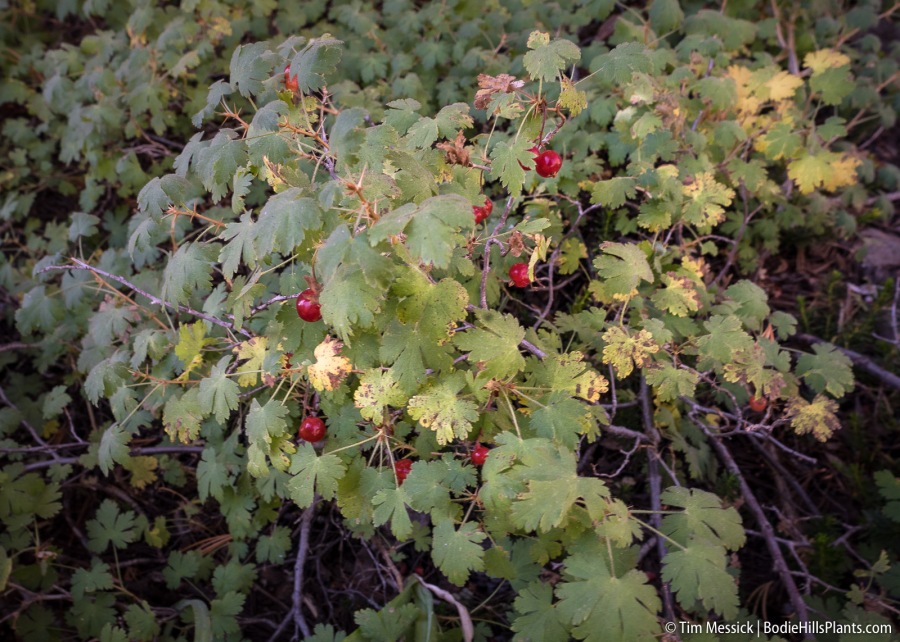 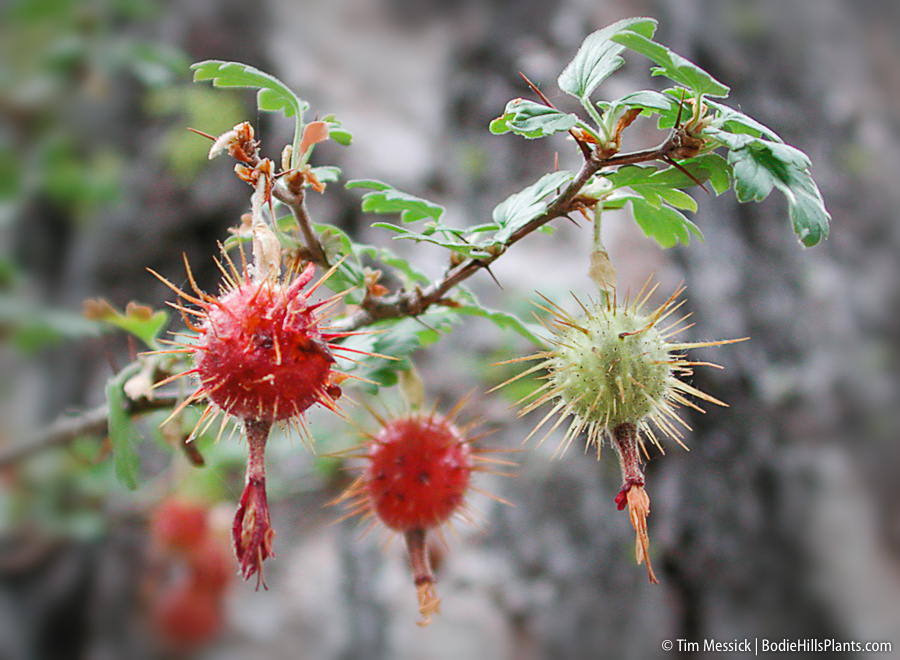