Bailey’s Greasewood in the Bodie Hills 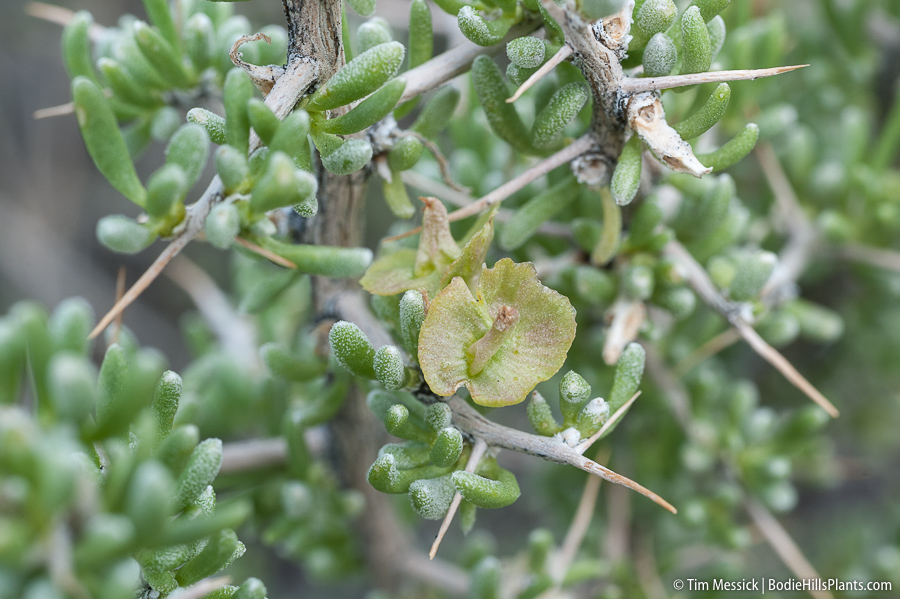 Just recently, looking through my Lightroom catalog at photos taken 3 and 4 years ago, I realized I had photographed Bailey’s greasewood (Sarcobatus baileyi), a plant I was unaware of at the time, but have since come to know a bit through observations by others on iNaturalist. I had noticed, photographed, and scratched up my hands on it twice: in May 2015, on a ridge just south of the Sweetwater-Aurora road (NF-028) and west of Red Wash Creek (in Lyon County, Nevada); then in September 2016 several miles farther southeast, where NF-028 crosses a low ridge to enter the west end of Fletcher Valley (in Mineral County). Only in 2019 have I recognized what it was, but I think it may be locally somewhat common on gravelly ridges in the low northern and eastern foothills on the Nevada side of the Bodie Hills.

The growth form, foliage, and habitat of Sarcobatus baileyi tend to be so different from the much more common and familiar S. vermiculatus, that it scarcely registers as a greasewood if you aren’t aware it exists. The flowering parts (male and female in separate clusters, and scarcely resembling “flowers” at first glance) are similar in both species, although they are nearly sessile in S. baileyi and are on longer lateral branches in S. vermiculatus. Here’s a key to Sarcobatous species, adapted from a few different sources:

Sarcobatus baileyi habitat (they are the greenest low shrubs here)

Bailey’s greasewood is distributed across the central and western Great Basin, nearly all in Nevada. Bailey’s greasewood has been collected in California east of the White Mountains in Fish Lake Valley, along Hwy 266, southeast of Dyer, Nevada, just barely inside Mono County. Calflora indicates it has been observed near Honey Lake in Lassen County and a paper on Sacrobatus ecology (Drenovsky et al. 2011) documents its presence south of Owens Lake in Inyo County.

Common greasewood (S. vermiculatus) has a much wider distribution across all of the Great basin and beyond, to Canada, the Great Plains, and Mexico. In and near the Bodie Hills, it’s common at Travertine Hot Springs, around Mono Lake, other moist alkaline meadow margins, and rarely in uplands or seasonal washes.

Sarcobatus baileyi and S. vermiculatus sometimes grow together and they sometimes intergrade; because of this, some individuals may not be clearly assignable to one species or the other. Intergradation may result from hybridization, soil or moisture stress, or in some cases pathogens or insect activity. Such intergradation has not been observed in the Bodie Hills, however. With somewhat limited habitat for both species, they probably remain fairly distinct here.

Who, then, was Bailey?
Vernon O. Bailey (1864–1942) was an American naturalist, mammalogist with the Death Valley Expedition of 1890-1891, and a Chief Field Naturalist for the Bureau of Biological Survey (part of what became the U.S. Fish and Wildlife Service). His name is commemorated in Canis lupus baileyi, the Mexican wolf, and several other species of plants (including species of Chrysothamnus, Echinocereus, and Yucca). (Other western plants, including an Eriogonum, have been named for at least one other Bailey—William Whitman Bailey.) The Sarcobatus was described by Frederick Vernon Coville, an American botanist (1867–1937) who was also in the Death Valley Expedition and wrote the report on its botanical findings. Later, Coville was chief botanist at the U.S. Department of Agriculture and first director of the U.S. National Arboretum.

In Coville’s 1892 description of Sarcobatus baileyi, he says, “The plant was first seen by Mr. [Vernon O.] Bailey at Cloverdale, Esmeralda County, Nevada, in 1890, and recognized by him as different from S. vermiculatus. In company with Dr. [Clinton Hart] Merriam he afterwards found it in a valley in Nye County, Nevada, southeast by east from Gold Mountain, near Thorpe’s quartz mill, and later in Fish Lake Valley … on the California State line. … I take pleasure in associating Mr. Bailey’s name with this shrub, both as a mark of his earnest and invaluable labors in the field of natural history and as a reminder of a warm friendship established among the vicissitudes of a desert exploration.” Vernon Bailey and C. Hart Merriam were not only close professional colleagues; they also became in-laws: in 1899 Bailey married Merriam’s sister—and prominent ornithologist—Florence Merriam.

5 responses to “Bailey’s Greasewood in the Bodie Hills”