A rainy day at Bodie

Earlier this year I was asked to contribute an article for the Bodie Hills Conservation Partnership newsletter and web site on Botany in the Bodie Hills. That was a tightly edited version for a general audience. Here, for the intrepid reader, is a slightly longer version with more details (and more photos).

The early months of 2019 were uncommonly wet in the Bodie Hills, so the soils were saturated, the creeks were flowing, and the seasonal “dry lakes” contained standing water. Years like this are especially good for exploring plant life in the Bodie Hills. At least 640 (possibly as many as 750) different species and varieties of plants occur in the Bodie Hills. This impressive diversity is due in large part to the variety of habitats and plant communities and other environmental gradients across the area.

Eriogonum caespitosum on a hill south of Bodie

Most of the range is clothed in sagebrush scrub (dominated by Artemisia tridentata) and pinyon-juniper woodland (Pinus monophylla and Juniperus osteosperma). These plant communities contain much more plant diversity than is apparent at first glance. Moisture and temperature gradients from the west to east sides of the range and from low to high elevations contribute to this diversity.

Low on the north side of the Bodie Hills, on road NF 128

From the “Elbow” bend of the East Walker River to Potato Peak in the center of the Bodie Hills, elevations range from about 5,600 to over 10,200 feet above sea level. Heat intensity and length of growing season vary a lot over these 4,600 feet, so the shoulders and summits of the highest peaks support plants you might not expect to find in the Bodie Hills. Above about 9,800 feet on Bodie Mountain and Potato Peak you will find sub-alpine and alpine plants more commonly seen in the high Sierra Nevada. These include bush cinquefoil (Dasiphora fruticosa), Eschscholtz’s buttercup (Ranunculus eschscholtzii var. oxynotus), mountain sorrel (Oxyria digyna), alpine hulsea (Hulsea algida), and Brewer’s draba (Draba breweri). A few of the highest peaks (Bodie Mountain, East Brawley Peak, and Mt. Hicks) also support small stands of limber pine (Pinus flexilis).

Potato Peak (elev. 10,237 ft) from the north side of Bodie Mountain

Snow accumulation sites are common on the steep north and east slopes of peaks and ridges. These areas tend to have sandier soils, extra spring moisture, and shorter growing seasons. At mid-elevations these are often where you find groves of quaking aspen (Populus tremuloides). At higher elevations (as along the Bodie-Masonic Road), these places may support small stands of lodgepole pine (Pinus contorta) and other plants less common in the surrounding sagebrush, like dwarf lupine (Lupinus lepidus) and Parry’s goldenbush (Ericameria parryi). 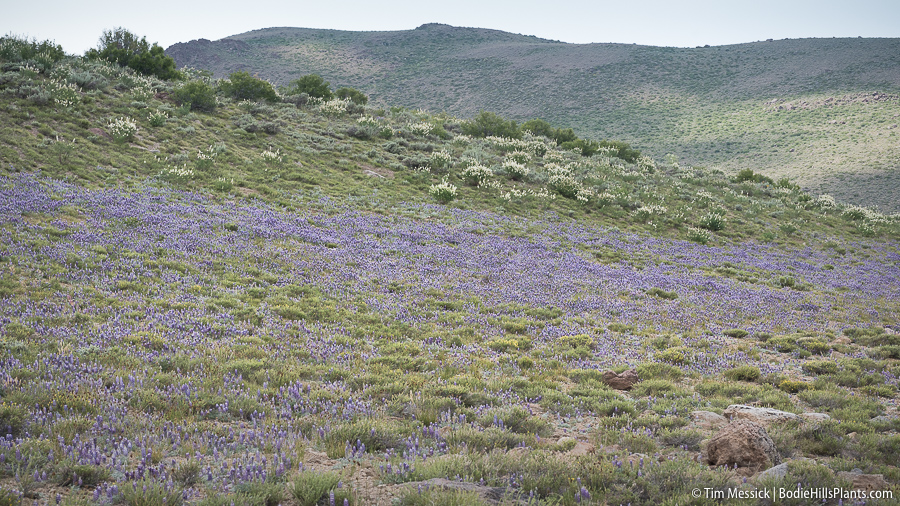 Aquatic plants have limited opportunities to thrive in the Bodie Hills, and in dry years they may not be able to grow at all. In wet years, at places like Dry Lakes Plateau and Chemung Lake (on the northwest side of Masonic Mountain), spikerush (Eleocharis macrostachya) will be standing a few feet tall in the shallow water. Water mudwort (Limosella aquatica) and the tiny smallflower gymnosteris (Gymnosteris parvula) may be abundant around the receding shorelines. As the soil dries out, the bright yellow flowers of tansy-leaf evening primrose (Taraxia tanacetifolia) will light up the lake beds, which may be visible from miles away.

Throughout the Bodie Hills are creeks, springs, and meadows where greater moisture and richer soils provide habitat for plants that need to keep their feet wet. These include many different sedges, grasses and rushes. Common shrubs along creeks and around springs include several different willows (but mostly narrow-leaf or coyote willow, Salix exigua), Woods rose (Rosa woodsii), aspens (Populus tremuloides) and occasionally buffalo berry (Shepherdia argentea). Clearwater Creek and Mormon Meadow, both along the paved highway to Bodie, are good places to explore these habitats.

Mormon Meadow (before the sheep move in)

High on Masonic Mountain, which is mostly granitic, you will find a spike-moss (Selaginella watsonii) and Torrey’s milkvetch (Astragalus calycosus) which are common on high Sierran granites, but rare in the Bodie Hills. Chalky white Miocene lakebed deposits are exposed several places in the eastern Bodie Hills, north of Aurora. At least one uncommon species of wild-buckwheat (Eriogonum alexanderae) is found only on these soils. 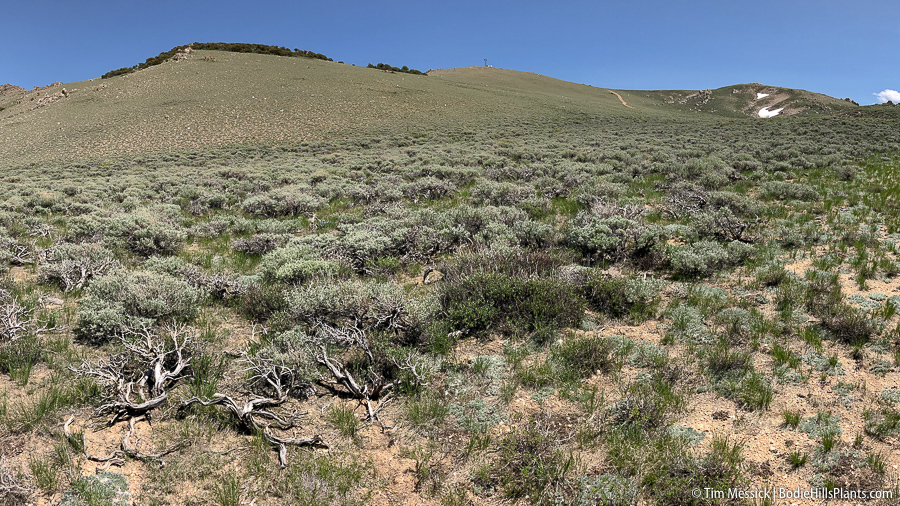 On Masonic Mountain, looking toward the summit

But listing and naming these plants can’t possibly convey the delight of finding them in the field. So, during your next visit to the Bodie Hills, make an extra stop or two at a meadow, hilltop, aspen grove, or any bright splash of color in the sagebrush, and see how many different plants, flower colors, and growth forms you can find. Notice the insects that visit them and the geology under foot.

You can download the free PDF annotated checklist of plants in the Bodie Hills HERE. To see what plants and wildlife other people are observing throughout the Bodie Hills, visit www.inaturalist.org/places/bodie-hills.

Mt. Biedeman and a grove of aspens